Fuchsware has built some of the best kitchen appliances In South Africa and it is still common to find them fully function in homes all over the country. 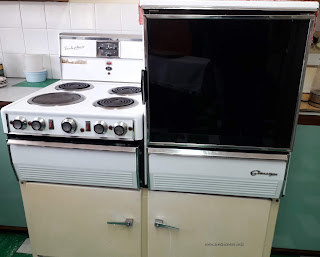 CJ Fuchs (Pty)Ltd was started by Carl Julius Fuchs in 1929, the first location use to be an ould stable situated at 149 Marshall Street, Johannesburg. In the early years, Carl who was a plumber focused mainly on spray-painting and plate-making. During the second world war, they also manufactured components for the military.

Later they ventured into the domestic electrical appliances under license from an American company called Wasting House Electric International.

During 1948 the business was relocated to a much larger factory in Alrode, Alberton, That's was also when the trusted domestic appliances brand "Fuchware" was born.
Apart from the domestic appliances like Refrigerators and Fuchs stove, the company also manufactured Circuit breakers, geysers, and stainless steelware. Later on, the company also started to produced television, electronic systems, and industrial electrical equipment.

April 1976 Carl Fuchs died and the company was sold to Barlow Rand. This also marked the beginning of the end for the Fuchware Brand.

Is it just Amazing that a 14-year-old boy who started working as a plumber apprentice during the recession years could build up a multi-million business that employed thousands of people.


There is no substitute for hard work

Feel free to contact me if you should need repairs advice