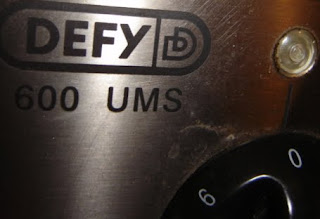 
Defy Appliances South Africa owned by the Franke group has been sold to Arcelik in Turkey.

The Arcelik Group are in turn part of the Koc group which has their finger in;

According to Mustafa V Koc, the chairperson of Koc Holding;- "This investment is a significant step taken in the African continent, in line with the growth plans of Koc Holding and Arcelik Group in global markets. I firmly believe that through this acquisition Arcelik will strategically position itself in the African continent, which I believe offers a high growth potential”

The same message was ego by the CE of Defy Ross Campbell Heron saying that Defy will be used to give Koc Holdings a foot-hold into the Africa (sub-Sahara).

This is all great news if you are an investor or you live somewhere in Dark Africa but for us little people live here in South Africa, it might not be such a good thing

• Defy never made radical changes to working part of their appliances - They only make improvement as technology improves (not changes) which means that replacement parts are available on most of their older model appliances (10 years and beyond).

Some of the issues that concerns me is with a company like the Koc Holdings who has 19000 employees and 11 productions plants around the globe.

1. Defy Factories in South Africa will not be able to compete labor wise with the groups factories in China and Russia. (Where they sometimes work only for food and accommodation) - not that I am say this group does that kind of thing. It is just used to make a point that our labor force still find it difficult to compete internationally.

2. Price wise it might be better for us the man in the streets of South Africa, Buying a new Defy Appliance we might will end up buying a Defy product which is actually made in Romania and the very next year the same product will be manufacture in Turkey - using different parts.

Resulting in what has happen to most other International Brands.
Shops and Wholesalers give you a Year warranty on a any new Appliance purchased but once the year is up they are finish with you. There is no after-sales service and no parts available without experiencing a long waiting time.

• They only import the product not any spare parts because there are so many different models of the same machine made in different factories. It is just not cost effective for them to import each and every countries model. Resulting in that most consumer has to replace the appliance because repair parts are just too expensive.

• Also when you phone the Central Services Center (thinking it is in South Africa)- Located somewhere in India - you can never get back to the same operator that you have spend 30 minutes explain what you need and then you got “cut-off”!

As always I have gone overboard again with this “Thing”, maybe it is all for the greater good of the South African people. Maybe the Arcelik Group are actually interested developing the Defy Brand

Well I am off to fry my eggs on my Defy